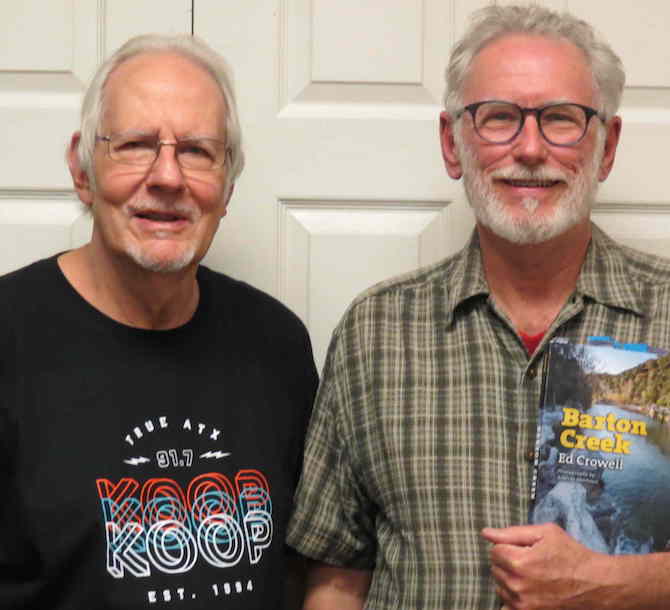 Thorne Dreyer's guest is Ed Crowell, author of Barton Creek. Following Barton Creek from downtown Austin's iconic Barton Springs Pool to its source as a cow-pasture trickle, longtime resident and journalist Ed Crowell explores the creek's contentious political history, its historic and current residents, and the mounting environmental pressures threatening it. Barton Creek highlights the passionate individuals involved in the stream's preservation, from city scientists to local landowners, who want to see the creek running clear and clean for future generations. Ed Crowell is an award-winning journalist and freelance writer. During his tenure at the Austin American-Statesman, he served as city editor, state editor, and features editor. He is coauthor of Barefoot Pirate: The Tall Ships and Tales of Windjammer, and he resides in Austin. According to Angela Richter, Barton Creek is a "... a joyful discovery and celebration of Austin's most beloved creek. The personal narrative provides a tactile connection to little known sections of Barton Creek, and illuminates the great success story of environmental advocacy that formed Austin's identity as an environmental city. Photo: Thorne Dreyer, left, and Ed Crowell in the KOOP studios. Photo by Roger Baker / Rag Radio. Rag Radio is produced in the studios of KOOP 91.7-FM, an all-volunteer,  cooperatively-run, solar powered community radio station in Austin, Texas, in association with The Rag Blog and the New Journalism Project, a Texas 501(c)(3) nonprofit. It is streamed live on the Internet at KOOP.org and Radio Free America. The host and producer of Rag Radio, Thorne Dreyer, is a prominent Austin-based activist and writer who was a pioneer of the ’60s underground press movement. The show’s engineer and co-producer is Tracey Schulz and the staff photographer is Roger Baker; Suzy Shelor is Rag Radio associate; Alice Embree is guest host; Glenn Smith and Roy Casagranda are our political analysts, and Evan Hearn is the Rag Radio apprentice. The syndicated show is broadcast (and streamed) live Fridays, 2-3 p.m. Central) on KOOP, and is later rebroadcast and streamed on WFTE-FM in Mt. Cobb and Scranton, PA., on Houston Pacifica's KPFT HD-3 90.1, by KKRN, 88.5-FM in Round Mountain,  CA, and at WALHRadio.com in Wilmington, OH -- and as a featured podcast at Veterans Today. Learn more about Rag Radio here.